HCF19 Interview: AfterShock Creators Tell Us Why Dark Red is So Bloody Awesome!

We all have a favorite vampire from Dracula to Angel, Eric Northman, or Vampirella, among others (honorable mention to Edward Cullen). There’s no denying that there’s a certain level of glamour associated with the lives these vampires lead.

That’s why AfterShock creators Tim Seeley and Corin Howell set out to tell a vampire story about a deeply average vampire framed by anger and broken promises in the heartland of America. A subversive take on the vampire genre, Dark Red seeks to find out what happens when a “forgotten man” is asked to rise to the occasion after all.

Check out our interview below with writer Tim Seeley and artist Corin Howell to find out more about the complicated, yet relatable characters and interwoven tales that fill the pages of AfterShock’s Dark Red #1! It’s so great, you’ll want to sink your teeth into!

Halloween ComicFest (HCF): For those who might be new to your comic book, give us a quick rundown of the story! 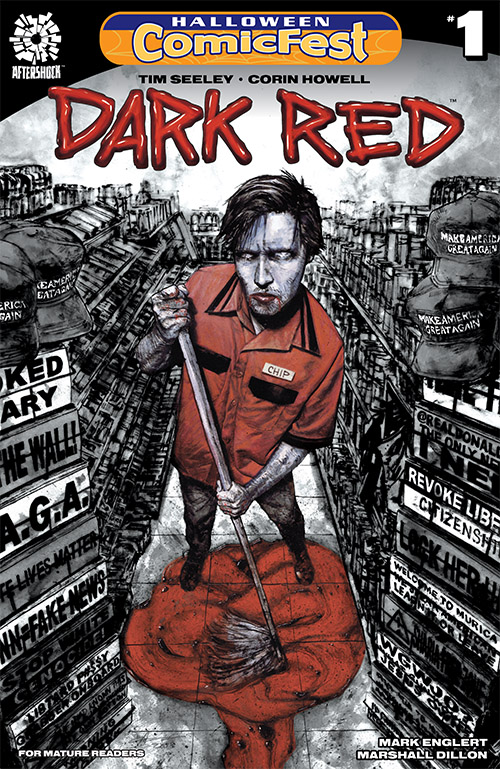 Tim Seeley (writer): Dark Red is about a rural vampire named Chip, who has to work a crappy job at an all-night gas station and gets none of the glamorous lifestyle we associate with his kind. And then the Nazis show up. It's the story of anger and bitterness, and the loss of the American dream.

Corin Howell (artist): It’s a story about a vampire named Chip who lives in a middle of nowhere, in a small town and works a crappy job at a gas station, and he ends up fighting Nazi Vampires who want to make the town their own.

HCF: How is Dark Red different from other vampire stories?

Seeley: We show what it'd probably REALLY be like to be vampire, and in doing so, I think we make a character who is far more relatable than we'd like him to be.

Howell: Dark Red is definitely a more down-to-Earth story about vampires, what it would be like to live as a vampire in this day and age—I mean, come on, not all vampires live in lavish penthouses and have tons of riches. This feels more real.

HCF: Tell us a little bit more about Chip! What makes him a complicated character and why will readers love him?

Seeley: Chip seems to be one thing, and as we read the story we realize he's actually something entirely different. And I think that he represents the feelings of a lot of America. He doesn't understand why the promises made to him aren't coming true. He's a complicated person, which I think sometimes gets lost in vampire fiction.

Howell: Chip is a vampire of simple pleasures. He doesn’t like the flashy city scene and prefers a quiet life out in the country. But he’s also living in this country during a difficult time, everything he’s wanted isn’t happening and he’s working at this dead-end job at a gas station. Something I feel is very relatable.

HCF: What has been your favorite part of the book or main character(s) to tackle?

Seeley: Evie, for sure. She's Chip's best friend--a woman suffering from a blood disorder that causes her to make too much blood. She's an outsider in the town she are up in, which I think I totally relate to.

Howell: Chip and drawing all the vampire gore. I mean, I haven’t had a real chance to draw any of this in previous projects, and I’m a huge fan of horror. So, this book, getting to draw Chip be all badass and tear Nazi vampires to shreds is REALLY fun.

HCF: Looking to the future, what can you tease about what Chip and the rest of the characters face beyond issue #1?

Tell us a little about you! What initially got you into comics and what’s your favorite thing about working in comics?

Seeley: I've been working in comics for almost 20 years. I love the collaboration...teaming up with someone to make something that neither of you could do on your own.

Howell: Besides being that kid that was always drawing in the middle of class, I got in comics mainly through my love of Transformers. Yes, I am a giant robot fan, and I saw you could make comics of giant robots, so I pursued the career and also found my incredible love for horror—and now I want to make more horror comics!

HCF: Many newcomers will be introduced to comics for the first time on Halloween ComicFest – what was the first comic you remember reading?

Seeley: Amazing Spider-Man #230: TO FIGHT THE UNBEATABLE FOE! Had me for life.

Howell: Transformers Armada #1 from the old days when it was still printed through Dreamwave.

Seeley: I still love vampires, even after all this time. My favorite horror comic that isn't my own is Swamp Thing by Alan Moore, John Totleben, and Steve Bisette.

HCF: Tell us why comic books are perfect for fans of Halloween and/or the horror genre?

Seeley: Because when you read a comic book, you become part of the story. Your mind fills in what happens between the panels. And no-one can scare you like you can.

Howell: Because you can make a horror comic about ANYTHING—your mind fills in the gaps of what gruesome, terrifying thing is happening on the page. It’s absolutely thrilling.

HCF: How do you plan to celebrate Halloween ComicFest? 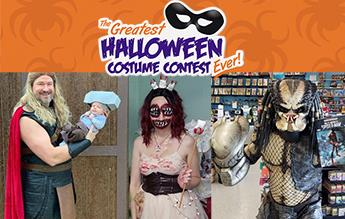 Click now to see the winners of Halloween ComicFest's The Greatest Halloween Costume Contest Ever! Thanks to everyone who entered and voted!