For titles coming out 11/20/2019, there's definitely something scary to read for everyone: Find out what happens to the World's Finest if the world ends in DCeased, a horrifying scene unfolds in Count Crowley, and more! 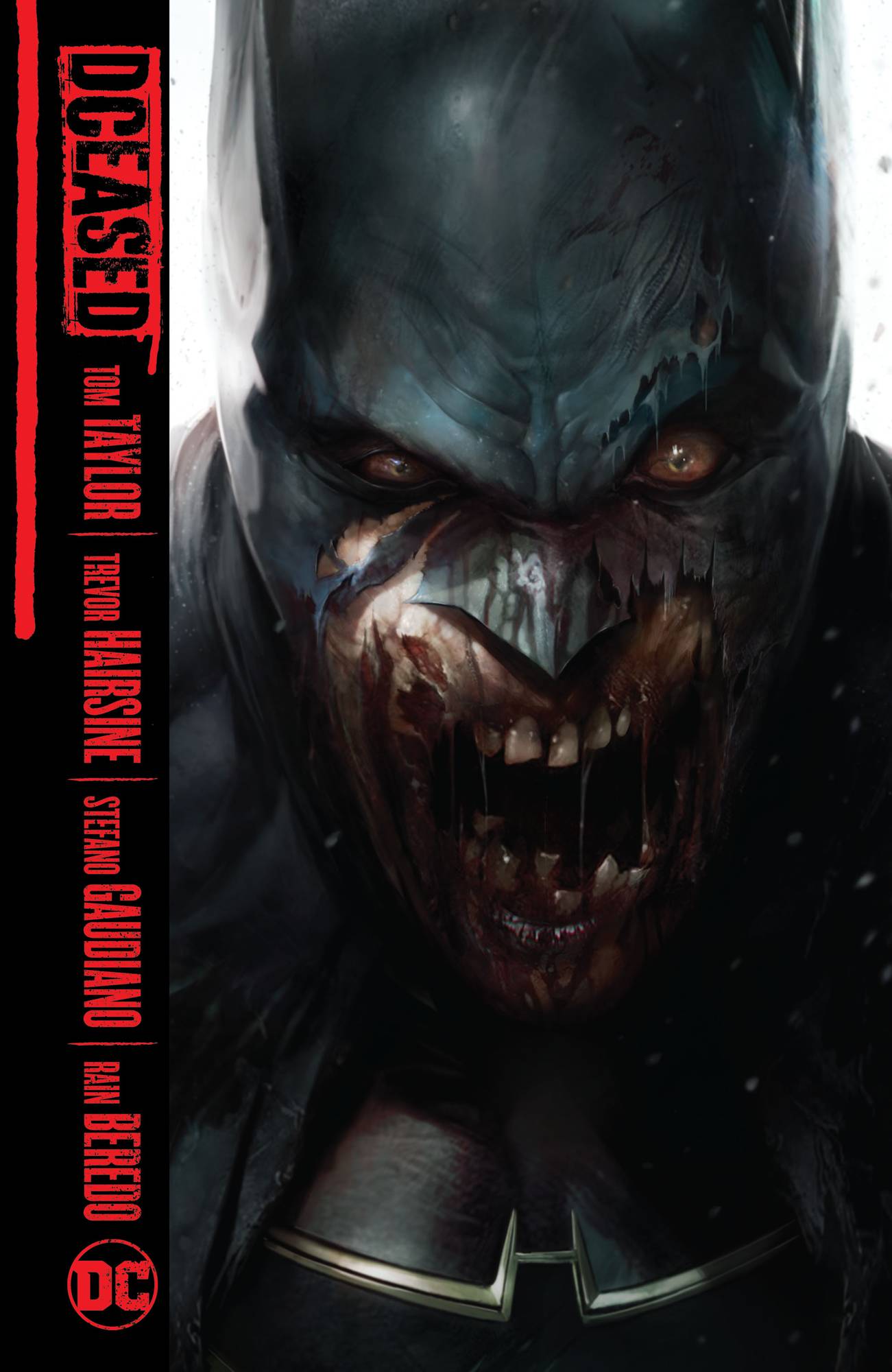 AUG190650
(W) Tom Taylor (A) Trevor Hairsine, Stefano Guadiano, James Harren, Laura Braga, Darick Robertson, Richard Friend, Neil Edwards (CA) Francesco Mattina
What happens to the World's Finest if the world ends? With death spreading across the planet, who will live and who will turn in this apocalyptic tale of heroism, sacrifice and annihilation? Fighting time, each other and all of humanity, Earth's greatest heroes must rally together for what may very well be their last chance to save the world from the most terrible plague humanity has ever seen. The Anti-Life Equation has been released and is ravaging the world at the viral speed of social media. Once exposed, victims lose their minds, violently attacking all around them. The heroes of Earth are fighting a losing battle to save the world... and themselves! Collects DCEASED issues #1-6 and DCEASED: A GOOD DAY TO DIE #1.
In Shops: Nov 20, 2019
SRP: $29.99
DC PREVIEWS Page #121
COUNT CROWLEY RELUCTANT MONSTER HUNTER #2 (OF 4)
DARK HORSE COMICS 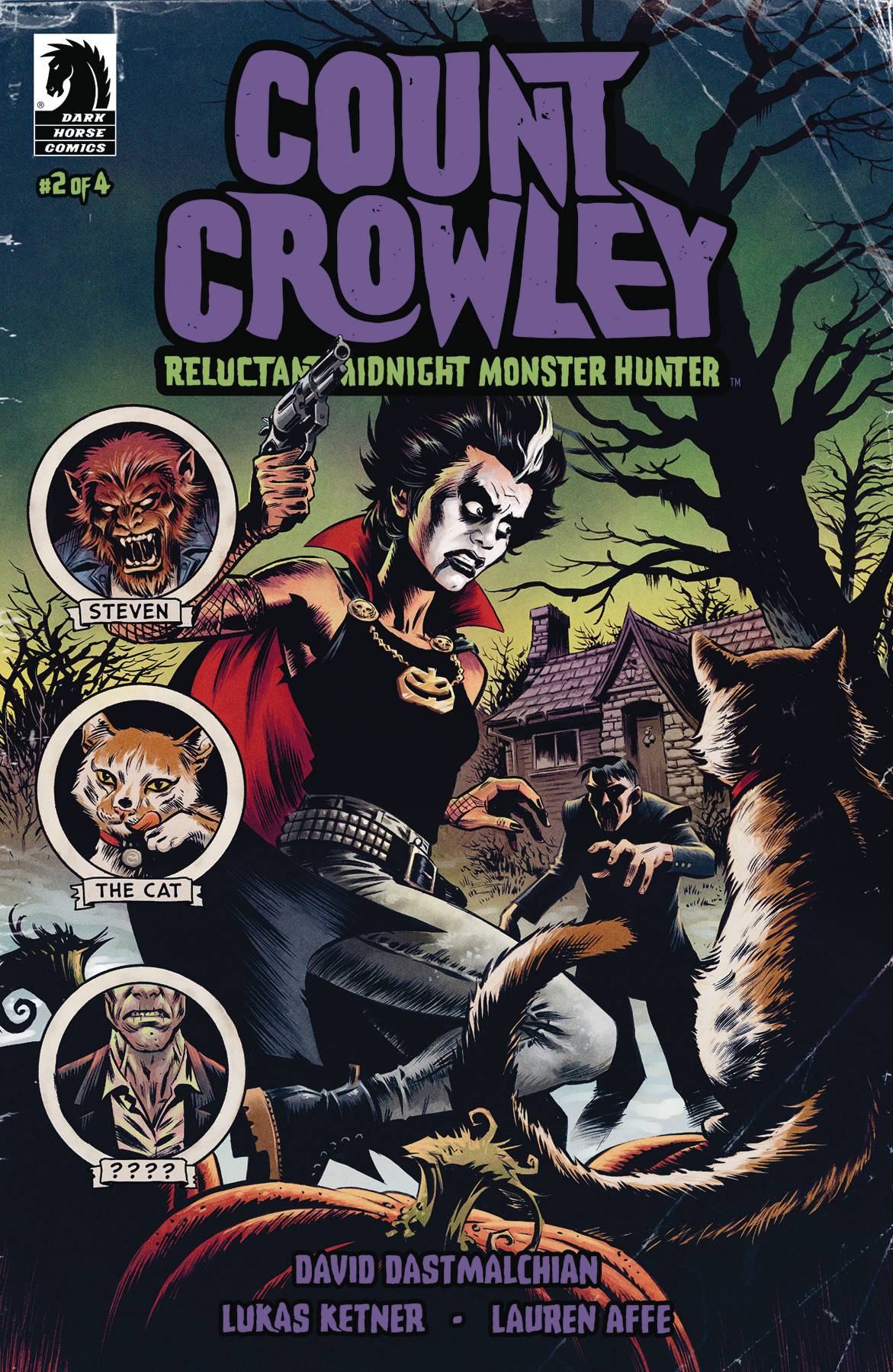 SEP190281
(W) David Dastmalchian (A/CA) Lukas Ketner
A horrifying scene unfolds in the moonlit parking lot behind KSKB-TV. Jerri Bartman, new host of the Count Crowley Show, is in the clutches of a bloodthirsty beast. How will she escape the snarling jaws of this animal? And what secrets lie buried within the abandoned home of her missing predecessor, the real . . . COUNT CROWLEY?
In Shops: Nov 20, 2019
SRP: $3.99
PREVIEWS Page #107
VAMPIRELLA #5 CVR A DODSON
DYNAMITE 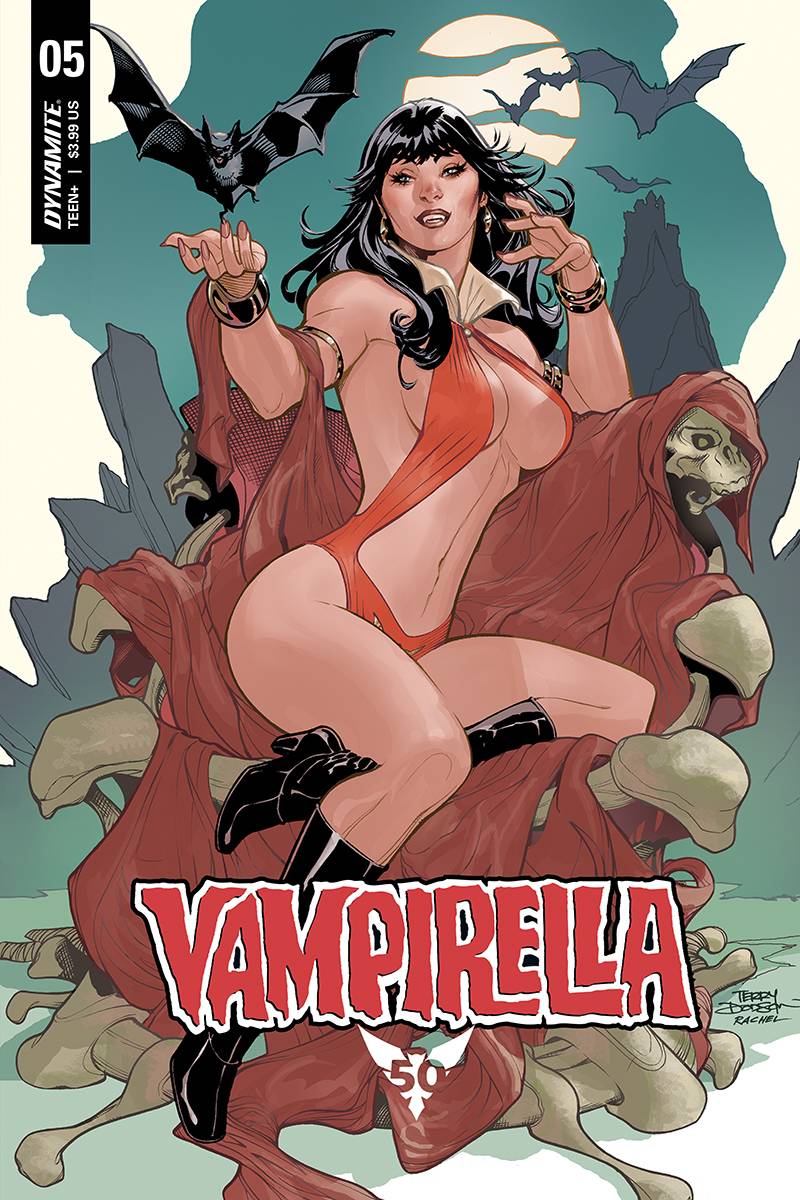 SEP191137
(W) Christopher Priest (A) Ergun Gunduz (CA) Terry Dodson
Seduction of The Innocent Continues: Following her mother, Lilith's advice, Vampirella chooses to end her loneliness by engaging in community, connecting with friends, building a new career, and creating roots within her adopted world-- which invites inevitable consequences as her enemies continue to gather for a mysterious purpose, and her mother receives a visit from a man from Vampirella's past.
In Shops: Nov 20, 2019
SRP: $3.99
PREVIEWS Page #182
DARK TALES FROM VOKESVERSE 2 #1
AMERICAN MYTHOLOGY PRODUCTIONS 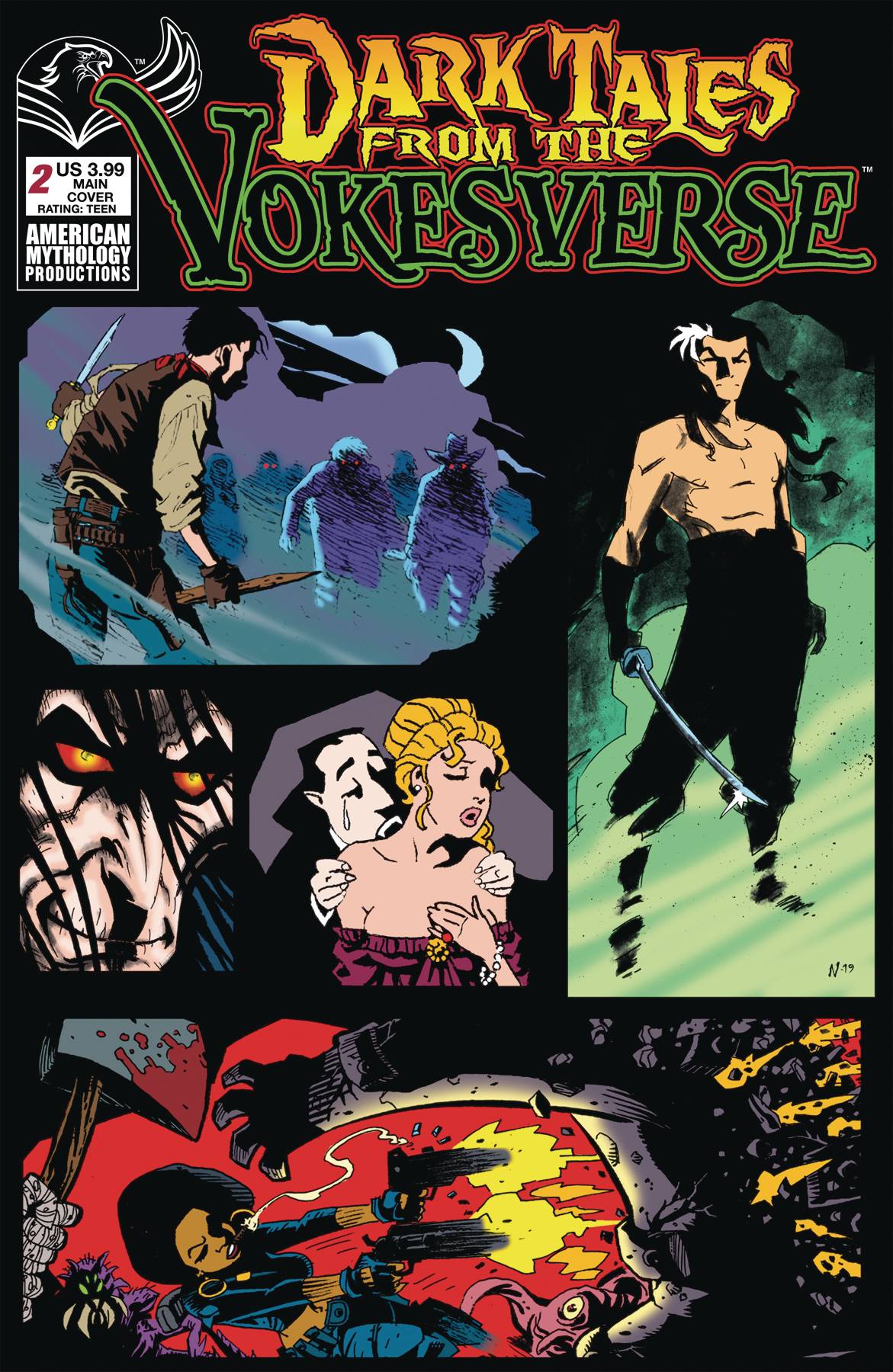 JUL191505
(W) Robert Tinnell, Jack Herman, James R. Tuck (A/CA) Neil Vokes
Just in time for Halloween and three years in the making, we return to the Vokesverse with creepy tales illustrated by Bronze Age comics' legend, Neil Vokes! Four terrifying stories filled with frights and expanded with new scenes and art, including a new "Marc of the Vampires" tale! A Wicked West dark folktale, "Return to Javers" and a lost-to-time unpublished horror story "Girl Power," deliver holiday horror galore. And the crown jewel of the issue - a brand new Eagle tale and prelude of the upcoming dream project - "Eagle the 7 Plagues of Dracula!" These are the dark tales from the Vokesverse...read at your own risk.
In Shops: Nov 20, 2019
SRP: $4.99
PREVIEWS Page #278
YOU ARE OBSOLETE #3
AFTERSHOCK COMICS 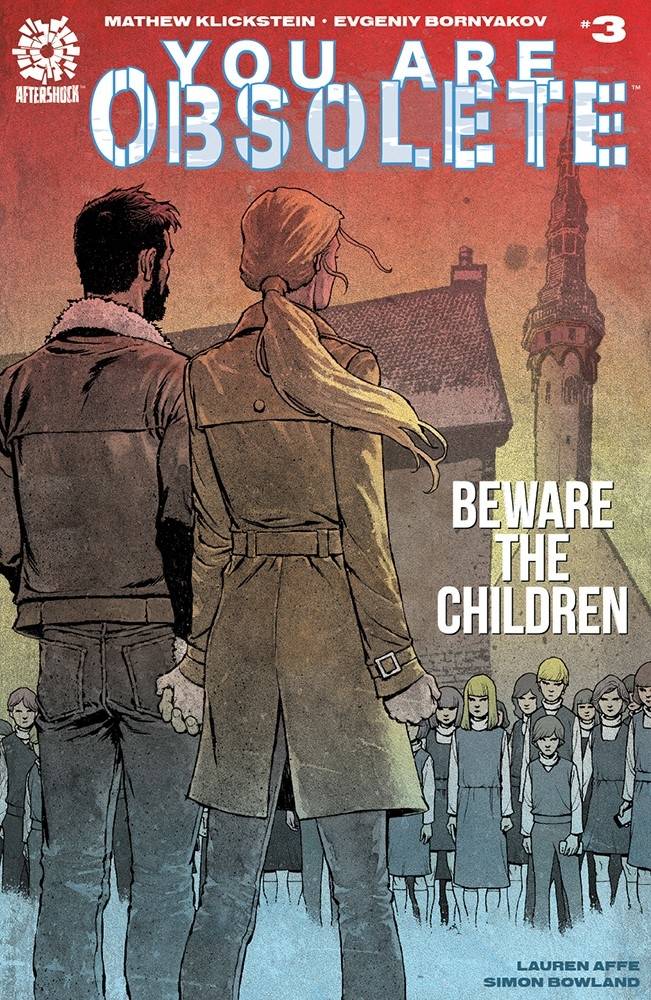 SEP191406
(W) Mathew Klickstein (A) Evgeny Bornyakov (CA) Andy Clarke
Investigative reporter Lyla Wilton discovers the awful truth as to why the children on the island she's been assigned to write about have brought her there. Will she help them with their devious plot...and does she even have a choice?

YOU ARE OBSOLETE is a spine-tingling thriller that evokes the eerie naturalism of 1970s horror films with a modern deadly digital twist. Written by Mathew Klickstein (Sony Pictures' Against the Dark, Slimed!, Springfield Confidential, Selling Nostalgia) and drawn by Evgeniy Bornyakov (DESCENDENT).
In Shops: Nov 20, 2019
SRP: $3.99
PREVIEWS Page #250